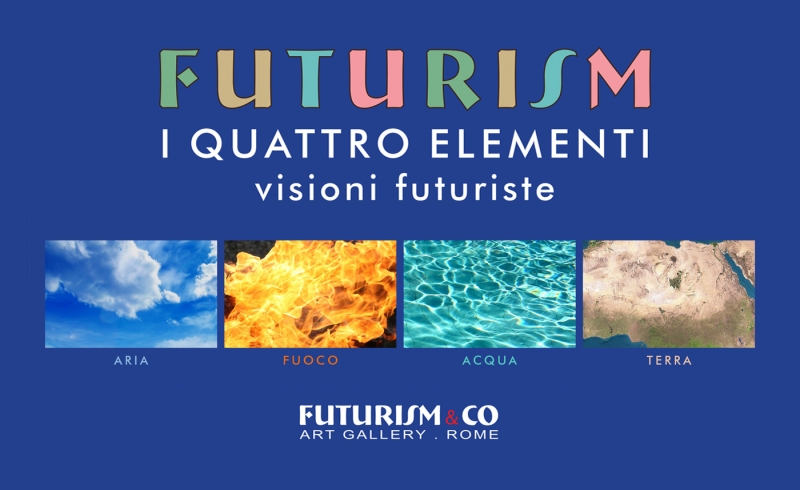 The poet must work with eagerness, splendour and generosity in order to increase the enthusiastic heat of the primordial elements.


«I am a waiting flame!
Go, brother go, run, to heat
the cold carcass
of this old world!»

Boccioni stated, precisely in the final lines of his essay, Pittura e scultura futurista (Futurist Painting and Sculpture) (1914): «Why should we ask ourselves if the fire we carry will end up by burning us? What does it matter? provided you can spread the fire on the world! ... ».
At the dawn of the pictorial Futurism, we find the same incendiary climate of the first Marinettian manifestos: «The cry of rebellion we shout [...] expresses the violent desire that boils today in the veins of any creative artist». In those years, three well-known canvases, in which the themes of transformation agitation and confrontation prevail, are dominated by the red-fire. Boccioni in La città che sale (Rising city) (1910-11) put at the centre of the canvas a huge frisky horse, which seems to be animated by fire. In Funerale dell’anarchico Galli (Funeral of the anarchist Galli) by Carrà (1911) the clash of spears and sticks, of curved and straight lines, is all immersed in a dark red-fire. Finally, La rivolta (The Revolt) by Luigi Russolo (1911), in which multiple red wedges penetrate between the dwellings (on the right red human figures align, leaning forward all with the same posture, almost to form a human torch).
The same red wedges, even hotter, return in Dinamismo di un’automobile (Dynamism of a car ) (1912-13), also by Russolo, in which it is no longer the human energy, but the speed of the car, to set the atmosphere on fire. The energy of fire is in machines, in renewed men (the futurists), and it is also, as we have seen, in animals. Also in Carrà the theme of the fiery horse returns in Il cavaliere rosso (The red knight) (1913), in which the knight is actually the element represented with colder colors, while the horse is almost entirely crossed by various shades of red.
Fire is the element that characterizes the personality of Marinetti himself. And this has not escaped to several of his portraits-painters. Do think to Ritratto di Marinetti (Portrait of Marinetti) by Carrà (1910-11), in which the poet seems almost burnt by the feverish passion for creation (you can even breathe something diabolical in the atmosphere); or to the later Sole Marinetti (Marinetti Soleil) (1920) by Rougena Zatkova, in which the whole face is fiery and radiant. Even in Famiglia Marinetti (Marinetti family) (1930-33) by Dottori the figure of the poet seems to be enveloped in flames. We cannot forget then the free word Ritratto di Marinetti (Portrait of Marinetti) composed by his maid Marietta Angelini: a number One in the middle, in red, surrounded by the definition “The red man” and by a number of laconic but emblematic descriptions («Vesuvian brain, burning flesh, boiling spirit, the rain of lava words, heart of sun, muscles of red-hot steel»).
The instinctive attraction towards natural elements and the fiery character of Marinetti’s personality must have had a sort of relation with his African origins and his juvenile experience in Egypt. A land still wild nowadays, where natural elements urge us to feel their intrusive presence. So at the time the poet spoke of his Mafarka the Futurist: «It will be an African novel. The fantasy and the morbid nostalgia that gives me so much sadness, they transported me to the country where I was born, and it is with a feverish exaltation that I am writing crazy things and powerful images on those lands where everything has the color of flame». These traits of FTM’s personality, derived from his African native place, assimilate him to southern temperaments, as the poet himself noticed:

«Oh Sicilians! Oh you, that since the misty times
fight night to day, hand to hand,
with the wrath of volcanoes,
I love your flaming souls
like crazy offshoots of the central fire!
You look like me, Saracens of Italy,
with a powerful and curved nose on the grabbed prey
with strong futurist teeth!
I have, like you, the cheeks burned by the simoom ... »

The interest in natural elements did not end in the so-called (at least until recently) “heroic” phase of Futurism, but certainly something in the following years changed: we can say that after the Great War also the fury of elements suffered from a re-evaluation.
Marinetti himself, in the manifesto Il Tattilismo (Tactilism), 1921, expressed his communion with natural elements showing a changed sensitivity compared to the one perceivable in the first manifestos.

«I was naked in the water of silk, torn by rocks, foamy razor-blade scissors, among iodine-impregnated seaweed mattresses. I was naked in the sea of flexible steel, which had a manly and fruitful breathing. I drank fom the cup of the sea full of genius to the brim. The sun with its long blazing flames vulcanized my body and bolted the keel of my forehead full of sails».

Artists and poets endowed with a less aggressive temperament than the founder will represent the energy of natural elements in various ways, especially in this second season of Futurism. From Incendio nella città (Fire in the city) (around 1930) by Gerardo Dottori, emanates a condensed energy: the heart of the canvas is dominated by tongues of fire in various shades of yellow and red, the surrounding buildings are all reddening. There does not seem to be any devastation, there prevails an intimate feeling of light and heat; the same flames do not have that characteristic of destructive aggressiveness they show in canvases of other futurists. «The Futurist painter - wrote Benedetta Cappa Marinetti in 1927 in a theoretical text of hers - is in nature, he experiences its necessary and superfluous, sweet and violent rhythms». A pure and essential energy permeates her canvas Ritmi di rocce e di mare (Rhythms of rocks and sea) (1929), in which natural elements solidify in compact and well-defined colors and volumes. It is no coincidence that Marinetti attributed to his wife «a primitive purity of an elementary temperament, for a long time friend and master of the elements of the Universe». A harmoniously balanced strength emerges from the works of Alessandro Bruschetti, in which the typical Umbrian landscape is represented with a continuous and enveloping rhythm. In Paesaggio collinare (Hilly landscape) (1935), in Acrobazie fra montagne e laghi (Acrobatics between mountains and lakes) (1933) and in other aerial landscapes, the trails left in the air by airplanes on intertwining and overlapping planes create a whirling but regular course. The aerial spirals take up and summarize the sinuous rhythm of the road layout that surrounds the rounded hills and the course of the calm rivers that cross the valleys.
Air is the principle of life and it is an element that nourishes fire. Wind, the moving air, is a futurist element. Aeropainting is also the conquest of air; Tato, Crali, Sibò and others painted planes that dominated air, leaving obvious trails with their wings, fuselages, propellers. In several of Sibò’s aeropaintings which represent the new cities arisen in the Agro Pontino after the reclamation Dalle paludi alle città (From the marshes to the cities), 1936-37; Sorvolando Littoria, (Flying over Littoria)1937; Virata su Sabaudia, (Turn on Sabaudia), 1936 ca.; emerges for instance, the clash among air, earth and water. This contrast appears in the chaotic juxtaposition between curved lines (the contrails of the planes, the undulating coastal profiles and the Circeo promontory) and straight lines (the regular layout of the new road system in the Agro Pontino and the newly built buildings in the foundation cities). The earth returns to life, it is a “redeemed land”, it takes revenge on water and marshes, which had paralyzed life in that territory for centuries. It is a land that, through the work of man and the use of new techniques, can finally release its energy. All this also emerges in the contemporary Poema della bonifica (The poem of the reclamation) (1935) by Giuseppe Trecca: «The assault of tanks / overwhelms the clods of earth/ in the undulating, grainy and parched rows of vines /scream the sirens of locomotives that jubilate rejoycing / it is a wild herd that upsets the lazy dreams / of the earth / and awakens it with piercing whistles». The integral reclamation of the Agro Pontino was a great example of man’s ability to use modern techniques to tame elements and natural forces. A fully futurist work, so much so that Marinetti himself on that occasion stated lapidary: «They are the machines that dominate nature».

I Quattro Elementi in una mostra